Is Joy REALLY Our Natural State?

Is joy REALLY our natural state?

Have you ever heard that abundance, joy, ease is our natural
state? How often does it feel that way? This is something that puzzled me for
the longest, I would hear it all the time and it resonated as being true… But
at the same time it seemed like so much effort to stay in that state, constant
affirmations, visualisations, NLP techniques, motivational videos and quotes.

It didn’t add up, I thought the deeper into my spirituality and consciousness I got the easier it becomes… which it definitely did, but I had reached a threshold.

The threshold I had reached was due to (and you can give it
what name you want) energetic leaks. You see when your boat gets a hole and you
start sinking, you can maybe plug a hole or two, but if you keep getting holes
eventually you run out of resources to stop your boat from sinking! It’s going
to become too much effort and you need to sit back and take a minute to
actually repair the boat.

Synonymously you could be leaking energetically through
burning unnecessary energy with for the foods you consume, the music you listen
too, tell-lie-vision and many other things, but the leaks I’m referring to specifically
here is TRAUMA.

Now the word itself makes it sound a bit catastrophic (or
maybe me putting it in bold and caps does ;p). But a trauma can be any event
that occurred in childhood from you losing your mum at the supermarket, you
being told to shut up when you were speaking too loud, to actual abuse.

But how does this equate to an energetic leak? Firstly,
let’s take a look at the professional diagram below.

Now that jagged line represents your experience (usually
between 0-7 years old) and that jaggedly line has certain spikes representing
what level of trauma that was experienced. Amidst the graph you’ll also notice
is that there is a threshold… this is where it gets interesting.

When you undergo an experience where you reach a certain
threshold, what happens is your consciousness undergoes a shutdown, to protect
you from whatever experience is about to take place (remember from an objective
perspective the trauma can even come from a mild seeming event), what this then
ends up resulting in is akin to a split in consciousness, to where that aspect
rolls in an infinite loop since it wasn’t able to get any closure from the
event. But what does that mean?

If you imagine yourself as a walking talking magnet, what
this then means is as you walk around, influencing your reality, you end up
creating or attracting scenarios that in a sense are pointing out this aspect
of you that has split off… why?

Because your being by nature IS whole, complete and wants
healing, so any chance it gets its going to point out where healing needs to
take place to return back to that state of wholeness, and what happens when you
ignore that?…

You get the same scenario come back to your 10x harder and
more painful to point you back to where your being wants you to look! (Have you
ever had those scenarios where it’s like… why does this keep happening to
me?… yea you’re trying to deliver yourself a message here!)

This is the flip side of the coin with the law of
attraction, it’s said that your thoughts create your reality, but it’s not the
thoughts that you’re aware of that’s doing the large part of creating it, it’s
you’re unconscious thoughts, or those laden in the subconscious which is doing
the majority of the work projecting your reality.

So you can see why hours of visualisation and affirmations
may only be yielding mild results for you (if that’s the case), it’s because
you’re planting seeds in a soil full of weeds.

You’re saying you want X, but internally there’s a split in
consciousness that is saying “Noooo thank you I don’t want to repeat that
again, you’re going to create another split!”.

Meaning if you’re struggling to be confident and speak your
truth, maybe some time ago you were really loud and your parent shouted at you
to “SHUT UP!” and for some reason that particular instance it was too traumatic
for you and boom, that aspect of you is still looping and to keep you safe from
the unknown result of that situation (because you shut down and split, thus
haven’t received closure, or the end result), you have internal resistance
preventing you going into the direction you’ve been wanting too.

Okay so this is enough for now! I will come back in the
next post talking a bit more about internal resistance and the 3
stages for identifying and processing any of these traumas and releasing our
baggage!

P.S. Check out the podcast episode I made on this topic. 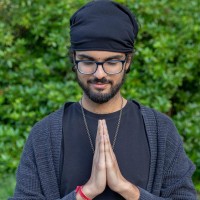 Certified Meditation Instructor, Secret Energy Soul Coach, Cosmic Sexuality Instructor and Living Biochemist (Holistic Health). Manvir is a gentle and loving soul, focused on guiding you back to the truth already present within yourself.

The Most Important Thing To Do Before ANY Action – Manvir Dhinse

[…] the previous post we talked about if joy REALLY is our natural state, where we got an intro into energetic leaks and […]

The Most Important Thing To Do Before ANY Action
Next Article

As I'm sure many of us have and do, I only tried t

Shout-out to everyone for making it through the tr